Pushing the boundaries at Duke Street

Background
Working on behalf of Wensum Homes Ltd, building firm John Youngs asked Sigmat to become part of the team charged with delivering 37 new build apartments in the cathedral city of Norwich. The brief was challenging but the outcome was stunning!

Challenge
The building footprint went to the very perimeter of the site where space was at an absolute premium. Added to this was the need for the construction team to not only deliver the project on time and within budget, but to also negotiate the mechanics of delivering 21 car parking spaces within an already space-challenged environment.

Solution
“This was another good example of Sigmat’s ‘vertical approach’ to construction paying massive dividends for the client,” said the Sigmat’s Pre Contracts Director. “We were not only able to supply the Light Gauge Steel Frames (LGSF) for the residential units, but we also called on our in-house steel team to deliver a hot-rolled transfer structure for the car parking which, visually, looked like a table top above the vehicle area from which construction teams were able to build.”

Hot rolled steels are much stronger, different to LGSF and are used where heavier loading is required.

Benefits
“The client benefits were considerable,” said Sigmat’s Pre Contracts Director. “Had we used more traditional methods – namely brick and block – there would have been way more site deliveries, perhaps six lorry loads for each floor vs Sigmat’s two loads. This has the knock on effect of an extended timescale along with the threat of spiralling costs.

“However, not only were our methods much ‘cleaner’, but we also reduced overall delivery time by around 33%, the direct result of using Sigmat’s modern method of construction rather than more traditional methods. And, thanks to the company’s in-house ‘vertical approach’, Sigmat was able to deliver both the LGSF and hot rolled steel, negating the need for the contractor to use two different suppliers. 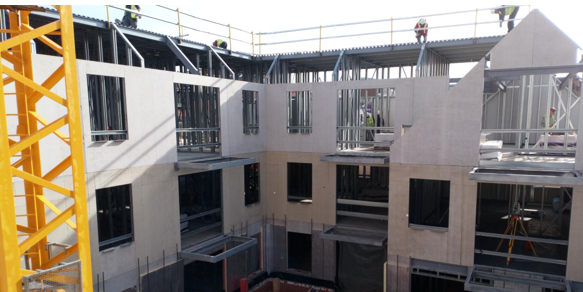 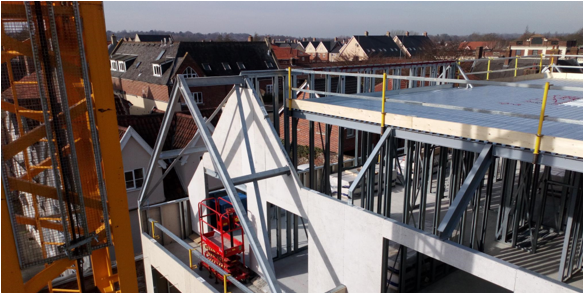